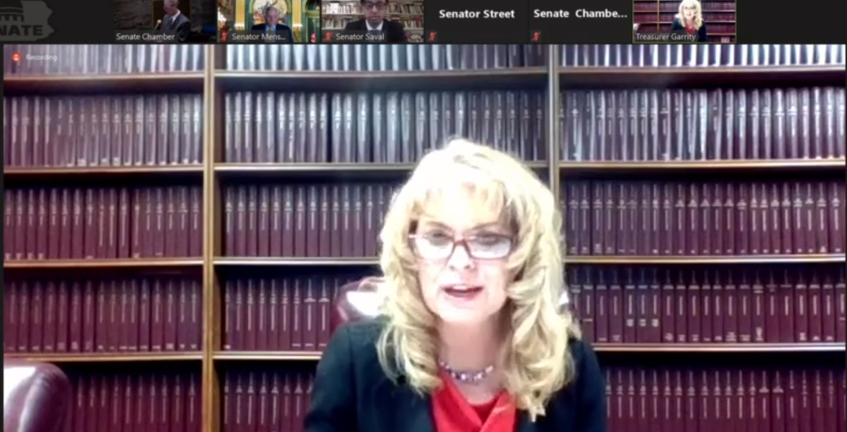 Chairman Browne, Chairman Hughes, and members of the Senate Appropriations Committee, good afternoon. I’m very happy to be here with you today to discuss the budget for the Treasury Department. With me today are Chief Counsel Christopher Craig and Senior Advisor Keith Welks. I’ve provided a written statement, and I know that Chairman Browne wants to get to questions as soon as possible, so I’ll be brief.


I want you to know that I will be a fiscal watchdog. I believe that every taxpayer dollar should be spent and invested wisely and efficiently. My job is to look out for taxpayers, and my highest priority is to ensure that Treasury is a good steward of their money.


Treasury manages a number of savings programs, including the 529 College and Career Savings program, Keystone Scholars, and PA ABLE.


I’d like to add one more: Keystone Saves. Far too many people don’t have enough set aside for retirement, let alone any emergency savings, and that lack of savings has tremendous negative consequences.


Research done by Treasury suggests that financially unprepared retirees will cost Pennsylvania taxpayers $14 billion in additional state social services and a loss of $1.4 billion in tax collections from reduced consumer spending through 2030. Also, data from the U.S. Census Bureau shows that four out of five working Americans – 80 percent – have less than one year’s income saved in retirement accounts.


We’re working with the General Assembly to design Keystone Saves as a business-friendly program to encourage greater retirement savings. It will be managed by the Treasury Department and our partners in the private sector, much like the 529 plan. And I look forward to working with you on that.


At the Bureau of Unclaimed Property, a new system is coming online in the next couple of months that will make this work even more efficient. Returning property to its rightful owners is important to me, as I know it is to all of you as well. But I must say that I have a special interest in returning military decorations. The fact that we have so many military decorations in our vault – including Purple Hearts and Bronze Stars – is heartbreaking. I’ll focus on returning those medals to their rightful owners, or their families.


Many of you are familiar with the Transparency Portal on Treasury’s website, and I want to expand that.


I also want to mention that I’m from Bradford County, a very rural part of Pennsylvania. And although my service in the military and my work in the private sector have taken me all around the world, I love my hometown. And I’ve seen that rural Pennsylvania can sometimes be forgotten by state government, so I’ve asked my deputy treasurers and directors to look for ways to increase rural outreach.


Since Fiscal Year 2018-19, Treasury’s GGO budget has been decreased by about 3.5 percent (or $1.3 million) despite the rising cost of salaries, most of which are mandated by the state’s collective bargaining agreement, as well as benefits and inflation over the same period.


I’m a committed fiscal conservative and am dedicated to frugality and the wise use of taxpayer dollars. A modest increase in Treasury’s budget is required this year for several compelling reasons that I described in detail in our submitted statement.


I am honored that Pennsylvanians have placed their trust in me. I will work hard every day to serve them with integrity, transparency, and accountability. Working together with the General Assembly and the Governor, I will seek to improve the Commonwealth’s economic health so that we will be better positioned to face whatever challenges come our way.


Chairman Browne, Chairman Hughes, and members of the Senate Appropriations Committee, thank you again. And I’m happy to answer any questions.