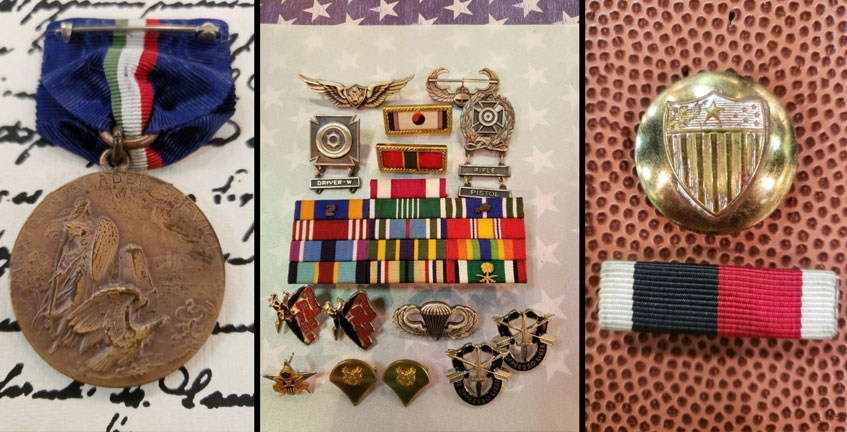 114 military decorations have been returned since Treasurer Garrity took office


Harrisburg, PA - Treasurer Stacy Garrity today announced the return of 36 military decorations to three different veterans and families of veterans living in Berks, Blair, and Chester counties, including a medal and ribbon honoring service in World War I.

“Of all my duties as Pennsylvania Treasurer, returning military decorations to veterans and their families is the most rewarding. Our veterans have served their country with bravery and heroism. The medals and decorations they earned can tell their story of service long after they’re gone. That’s why it’s such an honor to return them to their rightful owners.”


The 36 decorations being returned this week, including medals, pins, patches and military identification tags (dog tags), were sent to Treasury as unclaimed property as contents of abandoned safe deposit boxes. In addition to the WWI medal and ribbon, the items returned include WWII pins, a Republic of Korea Presidential Unit Citation, a Saudi Arabian Medal for the Liberation of Kuwait, and a 101st Airborne Division pin and patch. Garrity signed proclamations thanking the veterans and their families for their service and sacrifice.


Treasury’s effort to return military decorations is part of its overall work to return unclaimed property. While most unclaimed property comes in the form of money, Treasury also receives items such as jewelry, collectibles, and other family keepsakes – often from forgotten safe deposit boxes. All of the tangible items, including military decorations, are stored in Treasury’s massive vault.


Most tangible items are auctioned after three years if the rightful owner doesn’t come forward (leaving the proceeds of any auction to be claimed in perpetuity). Military decorations are never auctioned.


Treasury’s unclaimed property website went through a major system upgrade in June, making it easier for people trying to find their unclaimed property. To see if you have property waiting to be claimed, visit https://www.patreasury.gov/unclaimed-property/.


Anyone looking for more information regarding a claim or potential claim can email Treasury’s Bureau of Unclaimed Property at tupmail@patreasury.gov for assistance.


NOTE: Images are available to the media upon request.