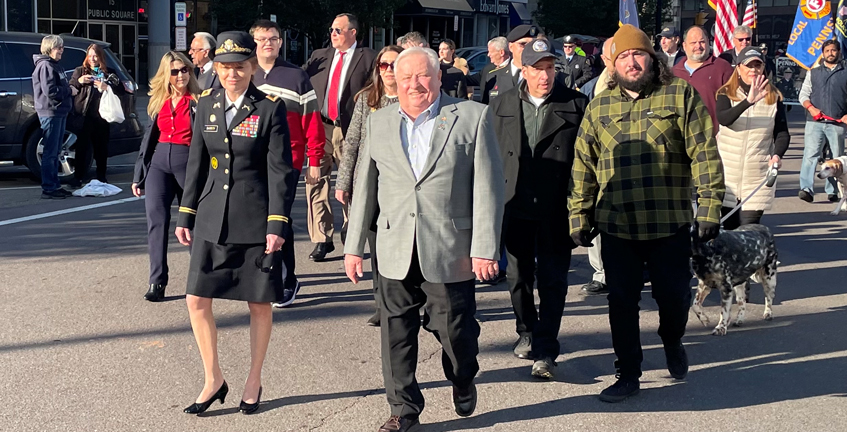 Harrisburg, PA - Treasurer Stacy Garrity was honored with the Outstanding Veteran Award as part of the 76th Wyoming Valley Veterans Day Parade celebrations in Kingston yesterday. Wilkes-Barre Mayor George C. Brown presented the Treasurer with the award at a brunch held prior to the parade step-off.

“Treasurer Garrity is a highly decorated Soldier with an exemplary military career that included three tours of duty overseas. She served at – and deployed from – the Ashley Reserve Center, where she spent many years training shoulder-to-shoulder with our neighbors, friends and family right here in our community. As State Treasurer, she continues to be an enthusiastic public servant dedicated to listening to the ideas and needs of local government. We are honored to present her with the 2021 Outstanding Veteran Award.”


This is the fifth year that the Wyoming Valley Veterans Day Parade Committee has presented the Outstanding Veteran Award.

“Serving my country was, and is, the honor of a lifetime. While I retired from military service because I reached the mandatory retirement date, I’m honored to continue serving the citizens of Pennsylvania as Treasurer – and to be able to give back to my fellow veterans. I’m humbled to receive this award.”


The Wyoming Valley Veterans Day Parade Committee also holds an essay contest with cash prizes to promote patriotism in local school districts and partners with organizers of the Veterans Day Parade 5K Walk/Run to raise money for veterans’ organizations. This year’s parade theme was “9/11 – We Will Never Forget; Honoring Those That Served.”


Garrity served in the U.S. Army Reserve for 30 years and retired with the rank of colonel. She served three deployments overseas, receiving two Bronze Stars and the Legion of Merit for her service. While overseas, Garrity oversaw prison operations at Camp Bucca in Iraq, which was named after Ronald Bucca, a New York City fire marshal who died in the 9/11 terrorist attacks. Under her watch, there were no reports of inmate abuse at the facility and zero escape attempts.


As the 78th Treasurer of the Commonwealth, Garrity is now in charge of returning military medals in Treasury’s unclaimed property vault. So far this year, she has returned more than 225 military decorations and memorabilia to veterans and their families.


Military items most often come to Treasury as contents of abandoned safe deposit boxes as part of the unclaimed property program. These military items are held in perpetuity until a rightful owner is found. To search for military decorations currently in Treasury’s vault, visit https://patreasury.gov/unclaimed-property/medals/.