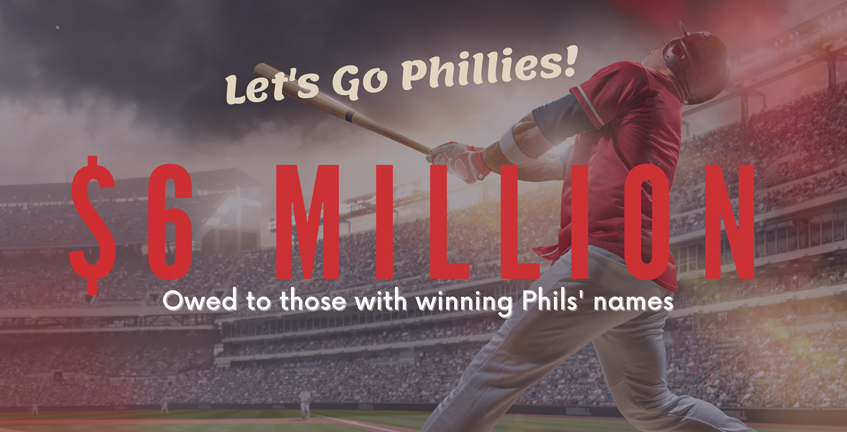 Grease the poles: More than $6 million awaits those with winning Phils’ names

“For the first time since 2009, our Philadelphia Phillies are National League champions thanks to Bryce Harper’s game-winning, two-run homer in the bottom of the eighth. As you get ready to tune in to Game 1 of the World Series against the Houston Astros, step up to the plate and visit Treasury’s website to see if you hit a home run with unclaimed property owed to you!”

“Searching our unclaimed property website is so easy you can do it between innings. Everyone at Treasury will be rooting for you like we’re rooting for an underdog team with huge heart to win a third World Series championship. One in ten Pennsylvanians is owed unclaimed property, so there’s a good chance you might hit it out of the park.”


In total, Treasury is currently seeking the owners of more than $4 billion in unclaimed property.


Searching Treasury’s unclaimed property database to see if you or someone you know has property waiting to be claimed takes just a few minutes at patreasury.gov/unclaimed-property. Last year, Treasury returned more than $135 million to Pennsylvanians.


In addition to money, Treasury also receives tangible items as unclaimed property. Tangible property may be auctioned after three years if the rightful owner does not come forward, but auction proceeds are kept in perpetuity for rightful owners to claim. Treasury never auctions military decorations and memorabilia.