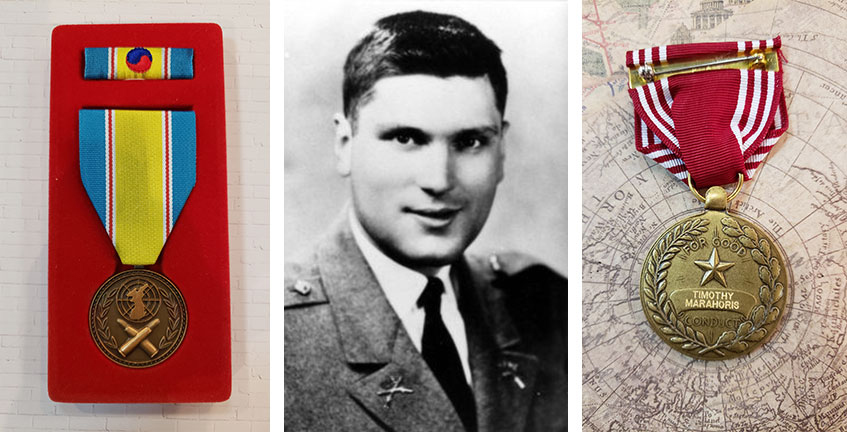 
After thorough research by Treasury, it was determined that Marahoris had no close living relatives to claim the military medals. Marahoris was a member of the Holy Trinity Greek Orthodox Cathedral congregation. Representatives Sheryl Delozier and Greg Rothman joined today’s event.

“Today’s return is unique and shows how important military decorations are to someone’s story. I’m grateful that Timothy’s memory and service are being honored in this way. Although he had no living relatives, it’s evident that the congregation of Holy Trinity Greek Orthodox Cathedral is indeed his family, and I’m honored to return his medals to them today.”

“Our Holy Trinity Greek Orthodox Cathedral is very honored to receive the military medals on behalf of Timothy Marahoris. Mr. Marahoris was a respected member of our Holy Trinity Parish community, and we feel blessed to be a part of this wonderful ceremony to honor his memory.”


Timothy Marahoris passed away in 2010 at the age of 80. His parents immigrated to the United States from Greece, and Timothy was an only child. He was never married and had no children. Treasury worked diligently to find living relatives who could claim the military decorations to no avail. However, Marahoris had strong ties to the Harrisburg area. Treasury learned about his membership at Holy Trinity Greek Orthodox Cathedral through a connection that led staff to contact the Greek Orthodox Metropolis in Pittsburgh.


The military decorations earned by Marahoris and returned to the church include:


Like most tangible unclaimed property, these military decorations were received by Treasury as the contents of a safe deposit box.


Treasury still has more than 500 military decorations, including Purple Hearts, Bronze Stars, Legion of Merit awards, campaign medals, dog tags, pins, buttons and more waiting to be reunited with the veteran that earned them or their family. There are items representing every branch of the military and nearly every major conflict.


These military items are never auctioned and will remain in Treasury’s vault until a rightful owner can be found.


Treasury maintains a dedicated military decoration database that can be searched by visiting patreasury.gov/unclaimed-property/medals.


NOTE TO MEMBERS OF THE MEDIA: Additional resources, including B-roll and photos of the military medals can be downloaded from Google Drive.